Despite repeatedly stating that he would support natural gas pipeline projects in Virginia as long as the Federal Energy Regulatory Commission (FERC) signed off, Virginia Democrat Ralph Northam is now backtracking, committing another major flip-flop in the process. This weekend, FERC approved the Atlantic Coast and Mountain Valley Pipelines, but instead of sticking to his word, Northam is now claiming that two more agencies still need to sign off on them: 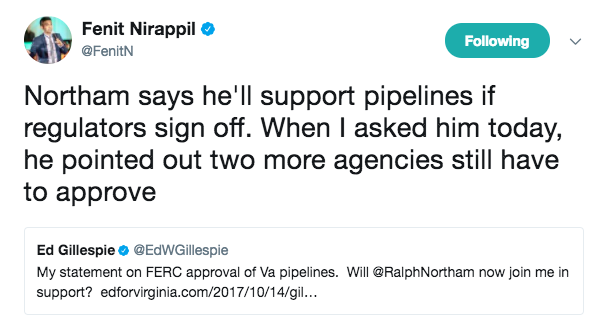 That’s a significant change from what Northam said during the second Virginia gubernatorial debate when he stated clearly that “FERC will have the final decision” on whether the pipelines should move forward:

CHUCK TODD: “Is the federal – so what FERC did, Federal Energy Regulatory Commission, is that enough or not enough for you?”

RALPH NORTHAM: “Well again as I explained earlier, we are working with the DEQ on the permitting, working with the corps of engineers, and at the end of the day yes FERC will have the final decision because it is a federal decision…”

Even after Northam appeared unequivocal that FERC’s approval should be the determining factor as to whether the pipelines are built, he’s now worried about losing anti-pipeline Democrat voters that have spent months causing heartburn for his campaign. But unfortunately for Northam, his phony attempt to play both sides on a highly consequential issue to Commonwealth voters reeks of political maneuvering and further shows that he will say and do anything to win an election, depending on his audience at any given time. Northam can’t be trusted to lead Virginia.