WASHINGTON, D.C. – Today, 21 Republican governors, led by Governor Bill Lee (TN), issued a joint letter to congressional leadership expressing their objection to the Biden Administration’s COVID-19 vaccine mandate on members of the U.S. Armed Forces and calling on Congressional leaders to take action to remove and prohibit the mandate. 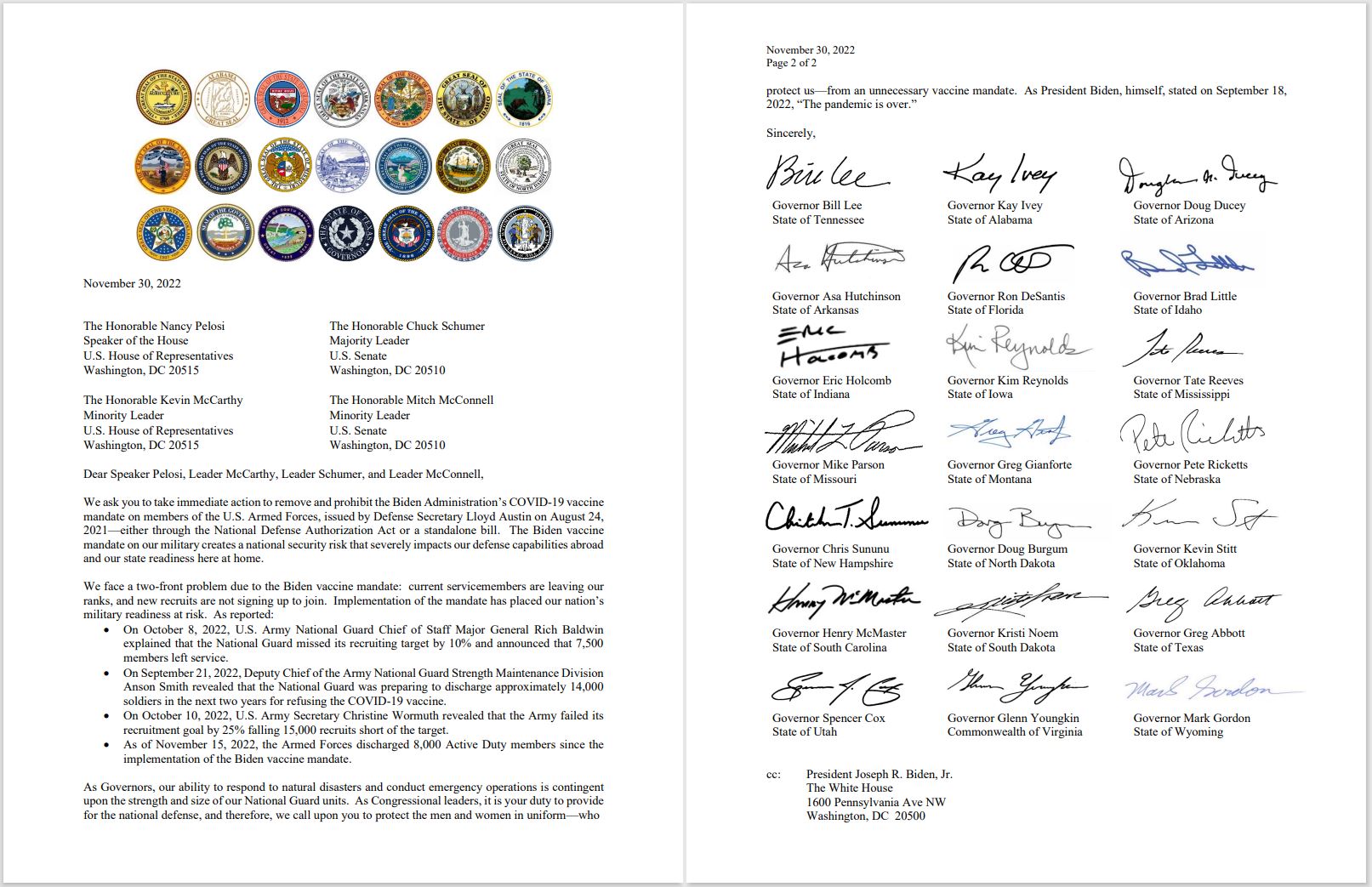 The governors expressed deep concern with problems President Biden’s vaccine mandate has created for our national security. The mandate is causing current servicemembers to leave their ranks and deterring new recruits from signing up, severely impacting the United States’ defense abilities at home and abroad.

The governors rely on a strong National Guard to respond to natural disasters and conduct emergency operations. Since its implementation, the mandate has resulted in the National Guard consistently missing its recruiting mark and forced the discharge of tens of thousands of service members. Not only does the mandate create a national security risk, but it also harms a governors’ ability to effectively serve the citizens of their states.

“We ask you to take immediate action to remove and prohibit the Biden Administration’s COVID-19 vaccine mandate on members of the U.S. Armed Forces, issued by Defense Secretary Lloyd Austin on August 24, 2021—either through the National Defense Authorization Act or a standalone bill. The Biden vaccine mandate on our military creates a national security risk that severely impacts our defense capabilities abroad and our state readiness here at home.

“We face a two-front problem due to the Biden vaccine mandate: current servicemembers are leaving our ranks, and new recruits are not signing up to join. Implementation of the mandate has placed our nation’s military readiness at risk.
…

“As Governors, our ability to respond to natural disasters and conduct emergency operations is contingent upon the strength and size of our National Guard units.  As Congressional leaders, it is your duty to provide for the national defense, and therefore, we call upon you to protect the men and women in uniform—who protect us—from an unnecessary vaccine mandate. As President Biden, himself, stated on September 18, 2022, ‘The pandemic is over.’”