With a new poll showing Democrat Gina Raimondo locked in a dead heat with Republicans despite spending over $1 million on early campaign ads to bolster her image, the incumbent governor’s re-election hopes appear to be in serious jeopardy. With the state’s press corps labeling the race as a “toss-up” with less than three months to go until Election Day, Raimondo remains the most endangered sitting Democrat governor seeking re-election this November. Here are some highlights of recent coverage:

WPRI-TV reporter Tim White claimed that the results of the poll show that the race for governor is a “Toss-Up:”

In a troubling sign for Raimondo’s campaign, the poll indicated her approval rating stands at just 29 percent among Rhode Island independents, an extremely low number after she spent $1 million in early ads to expand her support: 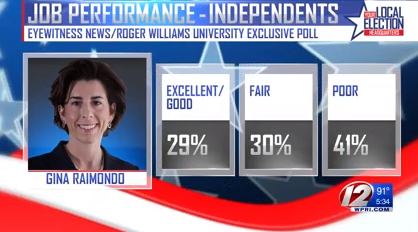 HuffPost’s Kevin Robillard noted that Raimondo’s numbers were a “long way” from fifty percent for an incumbent governor seeking re-election: 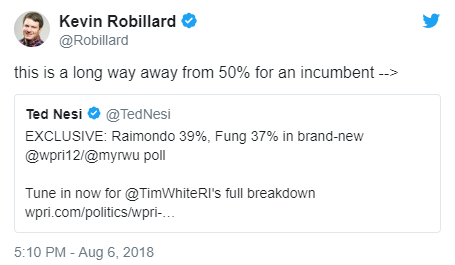 Before the poll was even released, Daniel D’Ambrosio wrote in Forbes that Raimondo faces a “tough re-election” with an energized primary challenge from Matt Brown, who has attacked her from the left. This new poll will only add to Raimondo’s concerns:

Raimondo is also facing a primary challenge on September 12 from Matt Brown, a 48-year-old former secretary of state of Rhode Island. Brown dismisses Raimondo’s talk of a modern industrial revolution as pure hype.

The economic facts that matter to most Rhode Islanders, according to Brown, are that the costs of health care, housing, education and child care have gone up, and continue to go up, while wages have ‘flatlined.’