Days after a new report raised serious questions about Deputy DNC Chair Keith Ellison’s ties to Nation of Islam leader Louis Farrakhan and Iranian dictator Hassan Rouhani, Washington D.C. Bureaucrat Richard Cordray still refuses to comment on his relationship with the radical Democrat leader. Ellison reportedly attended a private dinner with Farrakhan and Rouhani in 2013, despite Farrakhan’s well-documented history of inflammatory, anti-Semitic, and racially-charged rhetoric as well as Rouhani’s leadership of a hostile regime that has threatened to wipe Israel “off the map.”

But Ellison’s decision to associate himself with Rouhani and Farrakhan raises more questions for Cordray, who had a close relationship with the DNC leader throughout his time at the Consumer Financial Protection Bureau. Cordray visited Ellison’s congressional office multiple times over the last few years to discuss policy issues and when Cordray resigned from the CFPB, Ellison was one of the first individuals to stand by Cordray, calling him an “exceptional advocate for working families.”

Ohio voters deserve to know if Cordray will continue to embrace Keith Ellison. 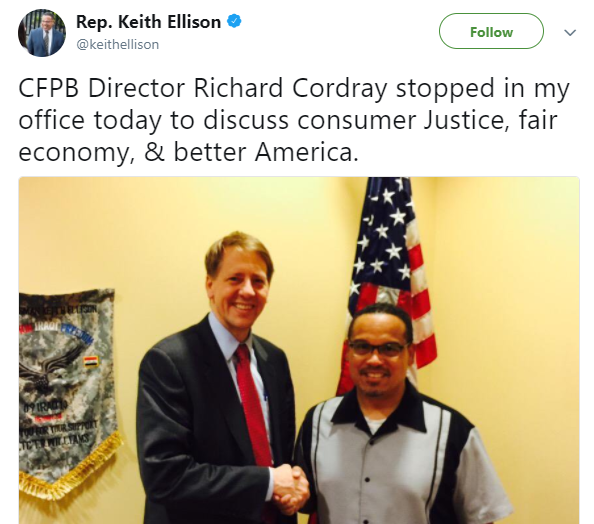