“Laura Kelly and her staff have literally taken her egregious abuse of taxpayer-funded resources for her political campaign to potentially criminal levels,” RGA spokesperson Joanna Rodriguez said. “Under Kelly’s administration, foster kids are sleeping in offices again and bridge deterioration is going unreported, but Kelly’s misuse of state resources to try and salvage her political career continues. Kansans footing the bill deserve better.”

The criminal referral stems from actions taken by Kelly and her staff in May, which RGA Kansas believes violated Kansas’ public integrity laws, specifically K.S.A. 75-2953(a). Violations of this statutory command are a Class C misdemeanor. The referral was submitted on behalf of RGA Kansas 2022 PAC by outside counsel Edward Greim. 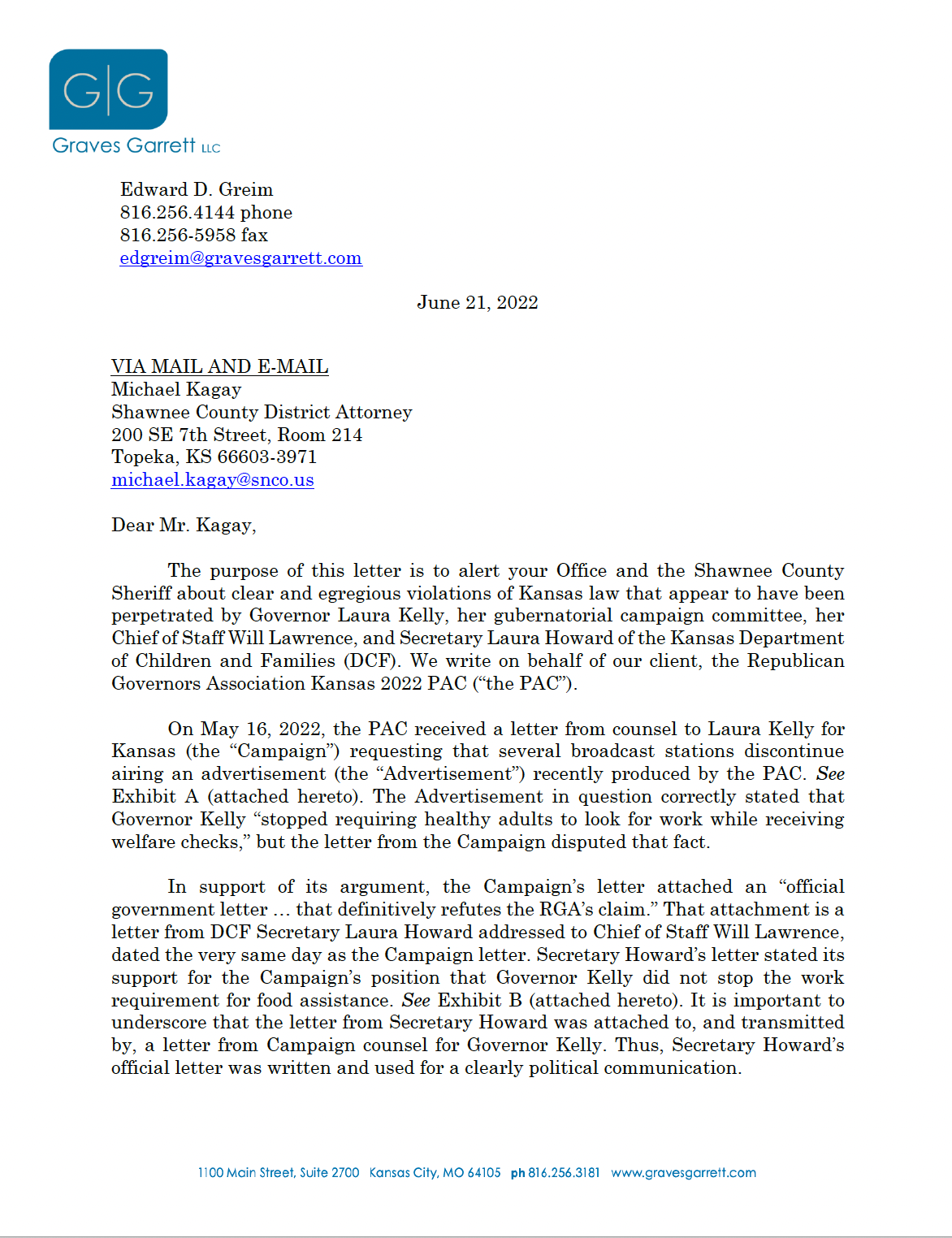 BACKGROUND
On May 16th, Governor Kelly’s campaign launched an ultimately unsuccessful effort to have an RGA Kansas 2022 PAC ad criticizing her taken off the air. As part of this attempt, her campaign provided an official letter to TV stations, dated the same day from Kansas DCF Secretary Laura Howard written to Kelly’s governor’s office Chief of Staff Will Lawrence. The move raised serious questions about how Kelly’s blurred the lines between her political operation and taxpayer-funded staff in the governor’s office and state departments. As a result, RGA Kansas filed an ethics complaint against Howard.

On June 2, Kelly broke the news that the Kansas Governmental Ethics Commission had dismissed a complaint brought by RGA Kansas – prior to RGA Kansas being informed of the result. Only RGA Kansas and Howard were set to receive notification on the Commission’s decision, yet it was Kelly who announced the news. Her being aware of the ruling, again, raises questions about where Kelly received her information regarding the final ruling. Following Kelly’s announcement, RGA Kansas contacted the Commission and was informed it had determined the complaint was sufficient. However, the Commission also took the irregular step, against the recommendation of the Executive Director, to determine probable cause concurrently. The Commission apparently dismissed the complaint, but RGA Kansas has yet to received any official notification of this decision to date.

RGA Kansas has submitted three records requests asking for all communications between the governor’s office and DCF around the time Kelly’s campaign submitted a letter from Howard as support for challenging the ad and communications between Kelly’s office and Kansas DCF from the time the ethics complaint was filed through Kelly’s announcement on June 2.