As Vice President Mike Pence and Donald Trump, Jr. prepare to campaign for Republicans in Louisiana, a panicked Democratic Governor John Bel Edwards is sprinting to the left. As his closing argument to Louisiana voters ahead of the October 12th primary, Edwards has finally decided to drop the act and embrace the radical resistance led by national Democrats.

Edwards has previously attempted to distance himself from his party and claim to have a “good working relationship” with President Trump, but that false narrative crashed and burned when top Trump campaign officials and Donald Trump, Jr. tweeted support for Republicans and opposition to Edwards on the first day of early voting.

Louisiana voters were left with zero doubt when President Trump himself debunked Edwards’ false talking point, tweeting that Edwards is “a Nancy Pelosi/Chuck Schumer Democrat” who “will NEVER be for us”:

President Trump’s argument isn’t a hard sell given that liberals like Edwards’ friend Stacey Abrams and Congresswoman Maxine Waters have come to Louisiana to campaign for of Edwards the Democrats.

Once the gig was clearly up, Edwards immediately took a hard left turn, mocking the president’s tweets and his Republican opponents to a rally of Democrat supporters:

And sending an urgent fundraising appeal criticizing the president for “coming after” him: 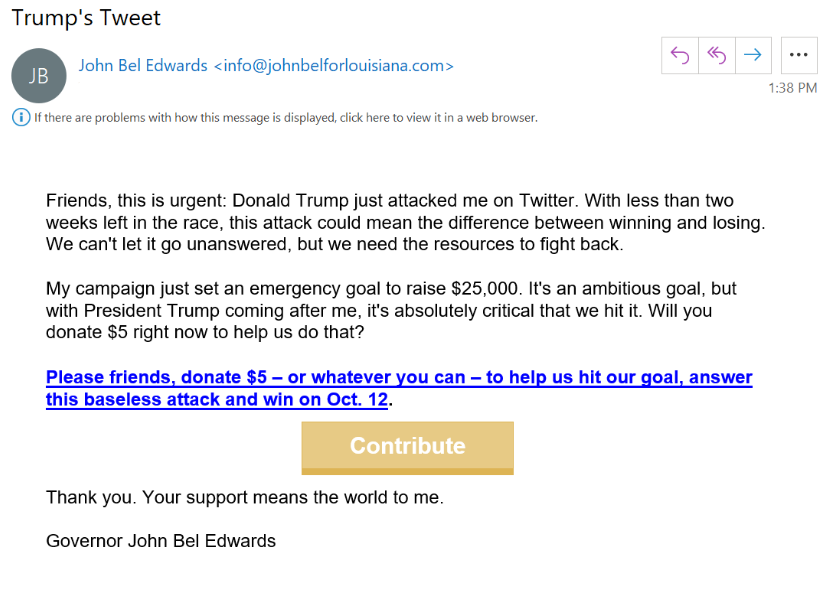 To remove any lingering doubt that Edwards is a card-carrying liberal Democrat, the Louisiana Democratic Party announced a “day of action” today to protest Vice President Pence: 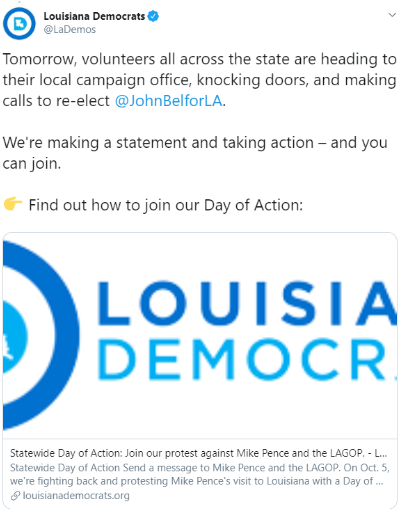 Watch our videos
The RGA @The_RGA
Gov. @HolcombForIN is ready to keep delivering real results for Hoosiers for four more years! twitter.com/HolcombForIN/s…
About 1 hour ago
ReplyRetweetFavourite