WASHINGTON, D.C. –This morning, Arizona Governor and RGA Co-Chairman Doug Ducey joined Fox & Friends First to discuss this week’s unproductive meeting between Joe Biden and some of the nation’s governors. Ducey also highlighted the administration’s continued neglect toward the crisis at the southern border.

During Monday’s meeting, Biden ignored pressing questions from Republican governors regarding the crisis. The meeting comes months after Republican governors asked Biden for a meeting to specifically discuss the border crisis and even offered possible solutions the federal government could enact address the problems at the border. The administration refused to acknowledge or respond to the governors’ request or policy recommendations.

The national security, health, and public safety crises stemming from Biden’s failure at the border impact communities across the country. Republican governors have stepped up to fill the void created by Biden’s failed immigration policies and refusal to address or acknowledge the problem. 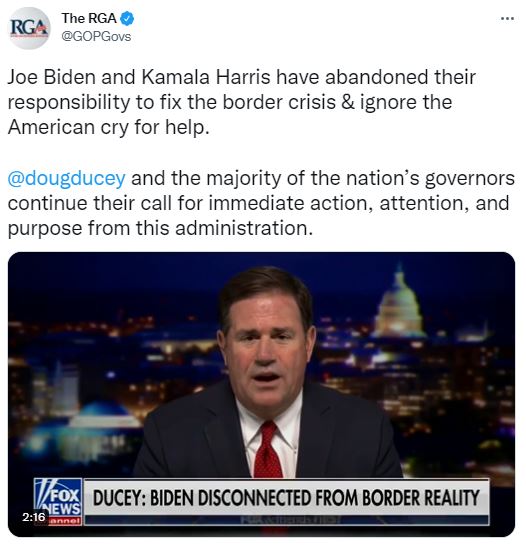 Watch a portion of the interview here.

TODD PIRO: “Arizona Governor Doug Ducey met with President Biden at the White House and he joins us now. Great to have you, Governor. Thanks so much for being here. When it comes to the border, let’s start on that. You warn that the cartels are not only shaping our border policy, but that the Biden White House is acting as their marketing arm. Did Biden have an answer for that?”

GOV. DOUG DUCEY: “The Biden White House is really disconnected from the reality at the border. They keep talking about the Northern Triangle, Honduras, Guatemala. They’re not addressing the real public safety issues that are happening at the border, what the cartels are doing, what’s happening around national security and the fentanyl that’s pouring over. So I think they have message points in that White House. They don’t want to address the reality of the danger and the drugs that are spilling into our country so we’re deploying our National Guard. We’ve got the Border Strike Force, but we’ve got other parts of the border that are wide open and unprotected.”

PIRO: “One of the things the president did say while the media was still in the room, he said we have a lot of work to do when it comes to the border. But one thing I’m sure he didn’t want to go into too much are these secret flights taking migrants from the border and flying them elsewhere throughout the country. Eventually, as you know, Governor, the media was ushered out of the room before you and your fellow governors were able to ask questions. Did anybody press the president on those secret migrant flights?”

GOV. DUCEY: “He was asked about the border and immigration. He didn’t touch on the flights that we are all so concerned about. And why I say he is so disconnected, he was very generous with his time, but he went on and on about the good old days, about when he and Lindsey Graham were trying to solve immigration when they were both senators. Now, listen, he’s been Vice President for eight years. He was out of office for four years. Now he is the President of the United States. He could take action right now that would secure that border. We sent him a 10-point plan from the Republican Governors Association that he could address immediately to secure our border. So what we want is action, attention and purpose from this administration and it can’t wait. It needs to happen right now. These fentanyl overdoses that we’re reading about in towns and cities well outside of Arizona are coming over our southern border and it needs to be addressed from a public safety perspective. If Kamala Harris is looking for root causes all she has to do is look inside the Oval Office.”